James is a specialist in the fields of clinical negligence and personal injury and has a wealth of knowledge in both areas. James’ specialism in clinical negligence has been acknowledged by his admission onto the prestigious AvMA Specialist Clinical Negligence Panel. He is also recognised in the leading independent guide to UK law firms, Chambers UK for being, “an extremely thorough practitioner”. James is also named in one of the principal guides to the profession, The Legal 500, where he is described as “very sound on tactics”.

James' medical negligence claims have involved a wide variety of issues, some examples include:

The claimant in this case underwent, what was supposed to be a routine spinal operation to his thoracic spine. The surgeon appeared to use a surgical technique that had been abandoned as too dangerous in the 1970’s, and as a result during his spinal surgery, Mr O suffered a profound spinal cord injury which has left him wheelchair dependent for life. This story was covered by BBC News.

James acted for a client who sustained a significant brain injury following a mismanagement of sepsis in hospital.  As well as issues surrounding hypoxia, this case also involved ICU syndrome and PTSD which developed as a result of the lengthy stay in intensive care.
Damages recovered: £2million

James acted for a client who had to have an above the knee amputation following repeated failures to diagnose that he had an ischaemic leg.  The case was complicated by the fact the negligence had caused a ten year acceleration to the loss of a limb that would always have required amputation.
Damages recovered: £560,000

James recently settled a claim against private neurosurgeon Mr Khai Lam (at London Bridge Hospital). The negligence in this claim surrounded both the consent process as well the fact that he attempted a spinal fusion procedure despite the fact the relevant spinal level was in fact already fused at the time of surgery.  The claimant suffered continuous back and leg pain as a result of the negligence.
Damages recovered: £581,000

Settling just four weeks before a full trial in the High Court this claim involved a negligent failure to diagnose a rectal abscess, which developed into a complex ‘horseshoe’ abscess.
Damages recovered: £380,000

James acted for a pianist who suffered catastrophic leg injuries to both legs when he was crushed against a wall by an articulated lorry.
Damages recovered:  £560,000

This claim was against a GP, and involved the failure to diagnose bilateral acute closed angle glaucoma, which in turn led to permanent damage to the patient’s eyesight.
Damages recovered: £150,000

A case involving a failure to manage an elderly claimant’s falls risk appropriately in hospital, which led to the claimant sustaining a major hip fracture requiring surgery and leaving him highly dependent on others on a day to day basis.
Damages recovered: £200,000

This case involved a failure to diagnose a form of hip fracture called a slipped upper femoral epiphysis (SUFE), in a child.  This led to accelerated acute arthritis and the need for additional hip surgery that would otherwise have been avoided.
Damages recovered: £250,000

A negligent failure to continue with IV antibiotics in the Intensive Care Unit following the diagnosis of meningitis contracted after brain surgery, leading to avoidable death.
Damages recovered: £70,000

This case involved a minor traumatic brain injury (TBI) caused when a faulty sash window in a local school fell onto the claimant’s head.  The claimant’s brain injury caused a permanent balance disturbance due to an associated vestibular disorder.
Damages recovered: £200,000

A personal injury claim involving an elderly lady who fell in a shop and required a complete shoulder replacement procedure which led to permanent restrictions.
Damages recovered: £127,000

A clinical negligence claim involving a negligent failure to identify a traumatic injury to the claimant’s urethra during a resection procedure for colorectal cancer.
Damages recovered £130,000

James read law at The University of Wales Aberystwyth where he obtained an honours degree and went on to complete his Legal Practice Course at the College of Law in Chester.   He joined Thomson Snell & Passmore in 2006 and became a partner in 2017.  James is married with three children and enjoys hiking in the mountains and all things ‘outdoors’. 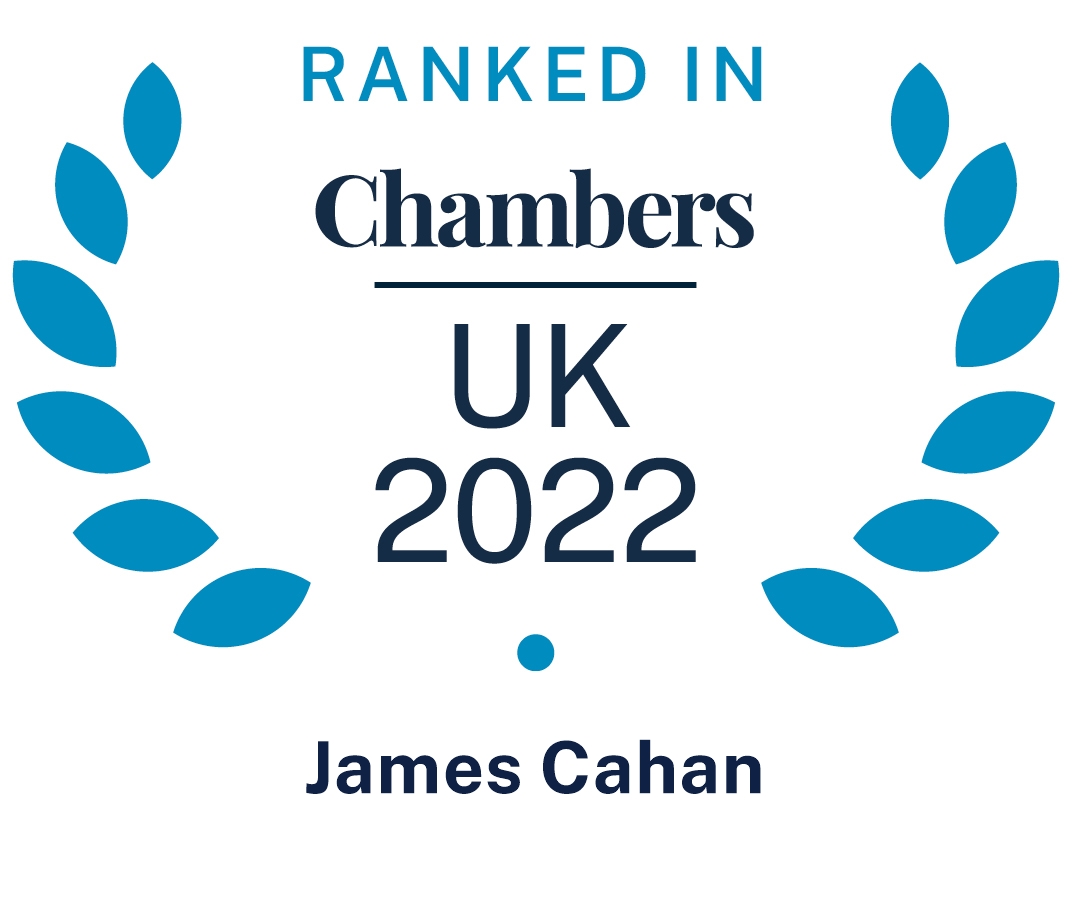 James Cahan is impressive and develops a great rapport with clients and counsel alike.

He is amenable, very hard-working and certainly gives lawyers a good name. He turned our case around.

Throughout the process I felt I was dealt with dignity and respect.  Fully informed, cared for and respected.  In fact the whole process has been a major part of the healing process for me.  Without Thomson Snell & Passmore’s involvement I would certainly still be suffering.

This has been a long, difficult and upsetting case. At all times James and his team have been caring, supportive and informative. My family and I appreciated that throughout. James always took time out to ensure we understood where we were at and what was next.

Throughout the period of working through the claim I was given full explanations at each stage of the process in a clear and understandable manner. James Cahan and his team were extremely professional and empathetic to my experience, they were thorough in the handling of the case and a pleasure to correspond with.

James’ analytical and strategic brain were fully evident, as was his depth of care and compassion.

At all times I was given appropriate and constructive advice in understandable terms. I was made aware of potential risks that might occur during the course of the claim and was explained suggested strategies to proceed with. I always felt included in these decisions and very confident in the advice I received.

His ability to manage the dynamics in complicated cases with the clients.

James was amazing. I don't think I have seen a lawyer who has been so dedicated to getting the maximum benefit for our daughter or case as much as James.

James Cahan is a superb claimant clinical negligence lawyer: bright, knowledgeable and highly motivated. He runs a mixed caseload of complex clin neg claims, including urological, surgical and delayed diagnosis cases and also has experience of fatal claims. He would be a standout partner at any firm.

James has a complete understanding of the cases and is doggedly determined to reach the best possible settlement for his clients.